One of the controversies last week was regarding the stance of Somaliland on the ongoing armed conflict in Ethiopia.

Fana Broadcasting Corporation (FBC) reported that President of Somaliland, Muse Bihi Abdi affirmed, during the visit of Somali Regional State President Mustafa Omer, the commitment of his government to the struggle Ethiopia has declared to quell existential threats it is currently facing. FBC added that Somaliland’s president ‘expressed commitment of his government to the military action Ethiopia is taking in the northern part of the country to defend its sovereignty’. 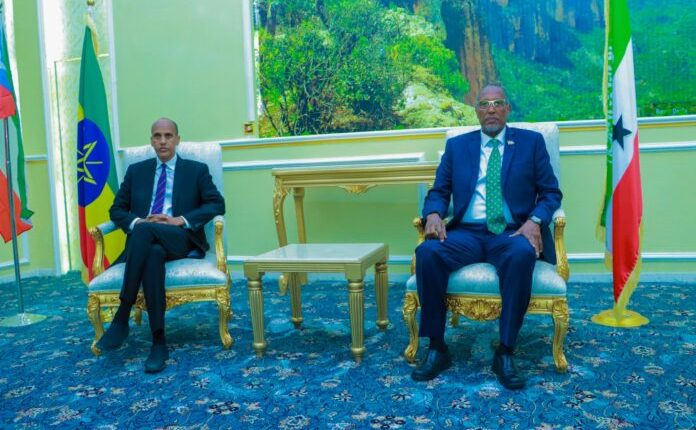 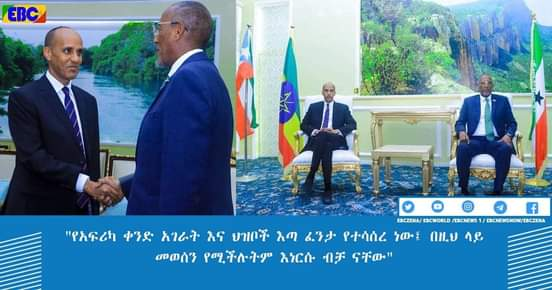 However, counterclaims appeared on social media that argued the news report by the state-affiliated media, FBC, was false and Somaliland’s President had not expressed any support to the Ethiopian government in its military operations against TPLF forces. One of these social media counterclaims appeared on Twitter and stated that the report was a ‘disinformation and Somaliland believes the armed conflict is a civil war and calls both sides to come together’.

As the armed conflict appeared to be escalating in the last two weeks, claims and counterclaims have been surfacing on the social media landscape. TPLF-affiliated media outlets and social media accounts reported that Tekeze Hydroelectric Dam was bombed by the Ethiopian government. The claim and social media reports have been shared by many.

It was a major controversy last week and follow-up video clips and counterclaims emerged. TPLF-affiliated news outlets released a video clip that they say shows the burning dam after being bombarded with aerial attacks by the government in Addis Ababa.

Claims that TPLF forces intentionally set the dam on fire to falsely accuse and defame the Ethiopian government were also part of the controversy.

There are reverse image searching tools such as Google reverse image search, Tineye, and others across the Internet. They are helpful and used most of the time to check whether an image was previously published with detailed information to fact-check image-related claims.

However, the tools and the methods have recently been observed to be intentionally manipulated to fabricate false information.

Last week, TPLF-affiliated social media users posted images that show senior civil and military leaders of the TPLF looking at a map claiming that the images were recent and that they were devising a new military strategy. 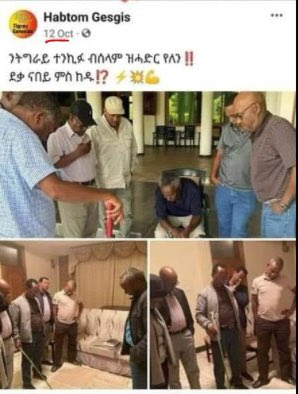 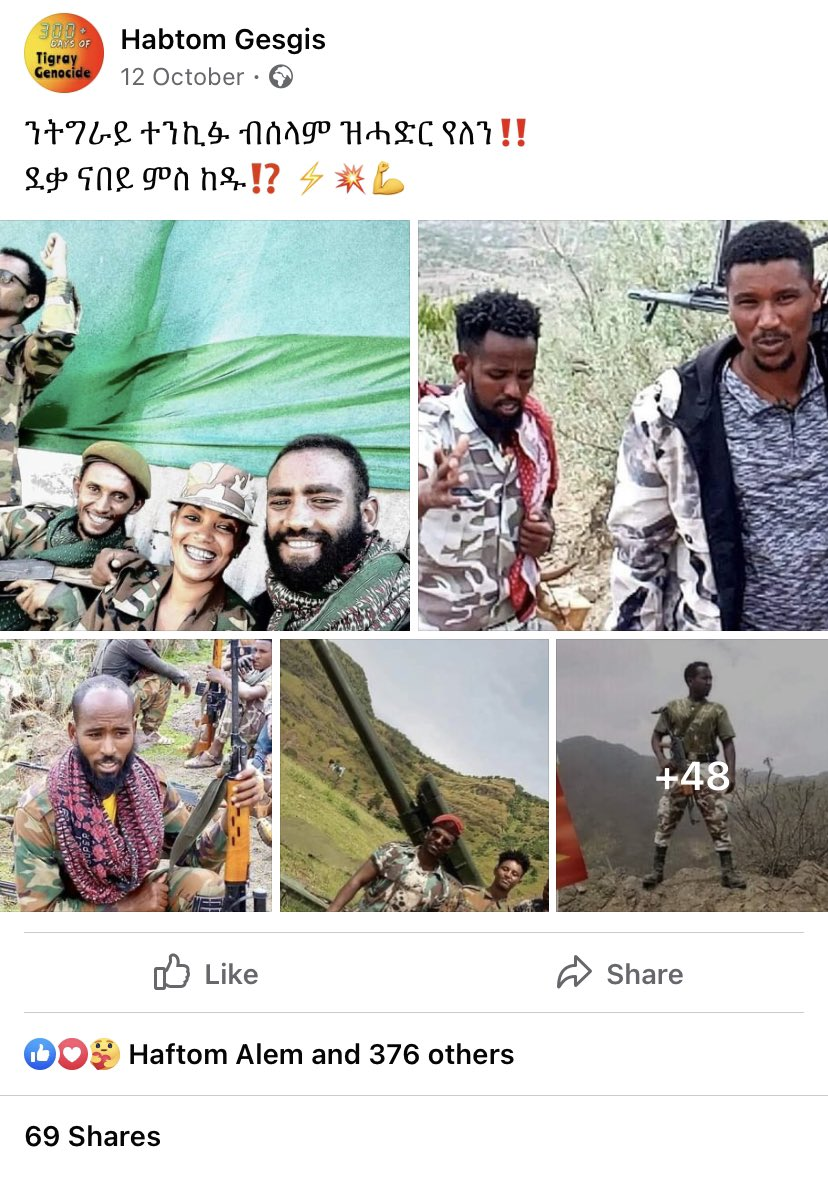 Two weeks ago similar manipulation was observed when Addis Ababa Police Commission announced it had seized a bulk of ammunition inside the premises of the Orthodox Patriarchate Church and released images. Counterclaimants posted manipulated screenshots to show as if the images were taken from Somalia. The counterclaims posted photoshopped images to disprove the originality of the images that were posted by the city’s police and claimed that they were taken from Somalia. The counterclaim posts were later deleted. However, the counterclaimed images were found to be false and manipulated.

The Ethiopian Ministry of Education announced last week that all secondary schools throughout the country will be closed for a week starting from Dec 6, 2021, so that students can harvest crop fields of those who are on the frontlines.

But the headline of the news article by BBC is somehow misleading and controversial. The content of the article is however accurate as it states that secondary schools are being shut down in order that pupils to collect crops of those who were enlisted in the federal-led armed forces.

Another controversy during the last week was the claim that members of the Oromia regional special police force were joining the Oromo Liberation Army (OLA) whom the government calls Shanne and labeled a terrorist group. A Facebook page with more than 436 thousand followers posted an image on Dec 2, 2021, captioned, “1,287 soldiers were recruited from the Oromia regional forces to join the Oromo Liberation Army.” By the time HaqCheck’s fact-checking article was published, the post had more than 1000 reactions and was shared more than 300 times. 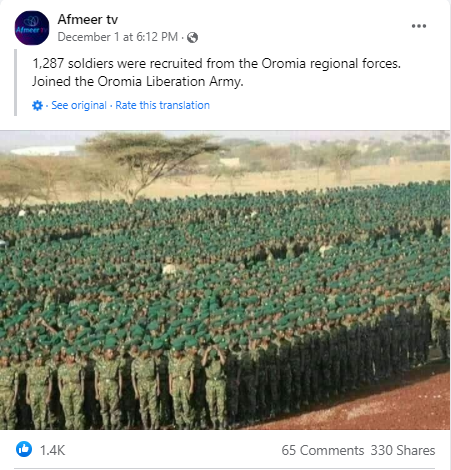 However, the picture was found to be captured from a cadet graduation video of the Oromia regional state special police forces 30th round graduation.

The image-related claim was confirmed as FALSE by HaqCheck though.

Sudanese soldiers near the Ethiopian border

A compilation of images was shared on Nov 30 by a Facebook Page, having more than 435,600 followers and a Twitter Account with more than 1,500 followers, in support of a claim that Sudan has sent numerous troops to the border it shares with Ethiopia. However, HaqCheck has examined the images and rated the post as FALSE. 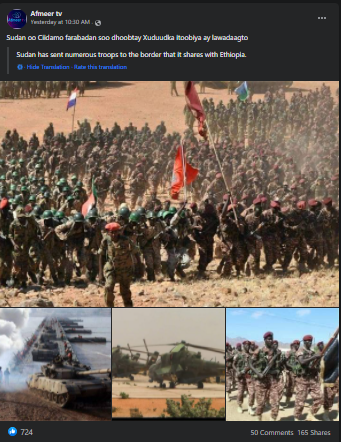 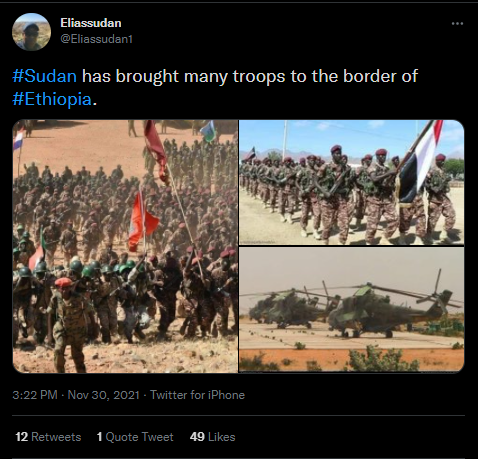 The Sudanese military on Nov 28 accused Ethiopian forces, for a second time in the past few days, of attacking its forces and civilians near the disputed border.

The Ethiopian government spokesperson Leggese Tullu denied the allegations that the Ethiopian army launched an attack on Sudanese troops, with a justification that “a large group of rebels, bandits, and terrorists have entered (from Sudan), and The Ethiopian National Defence Force and the local militia have eliminated them.”

However, HaqCheck has undertaken a reverse image search of the pictures to learn that the post doesn’t actually prove the claim.

The first image was taken in Dec 2016 while the Sudanese army was exercising in northern Sudan.

The second image was posted a year ago on Apr 10, 2020, on a website article presented in the Chinese language.

The third image was taken 14 years ago by S. Telliks. This photo was published on a website on 24 Nov 2019.

The last photo was published on Nov 21, 2021, on an Arabic website in an article entitled, “The Sudanese armed forces deny the occurrence of armed clashes with Ethiopia”

HaqCheck has analyzed the images and proved that they do not show the claim that “Sudan has sent numerous troops to the border of Ethiopia” and rendered it FALSE.

A Facebook page with more than 75 thousand followers posted an image on Nov 28. The Amharic caption reads, “Captured prosperity army members at the Kasagita, Afar front, yesterday.”  The claim went viral and got over 800 reactions at the moment. 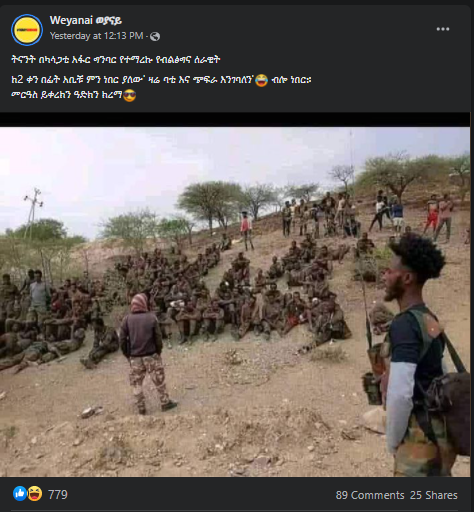 The image was also posted by other pages and news sites in different contexts. However, HaqCheck looked into the image and rated it as FALSE.

A reverse image search of the picture, attached to the post, shows that the image was previously posted by a Facebook page named Tigray Press on Aug 5, 2021.

HaqCheck recommends social media users be conscious of various content on every platform. They should identify the right pages and sources to understand the intention and authenticity of the message they are reading or sharing.

HaqCheck news outlets in support of either of the belligerent groups to offer accurate information to the general public.

We recommend that concerned government and non-government bodies avail timely information. Because information disorder and disinformation tendencies are usually high during a shortage of sufficient up-to-date information.